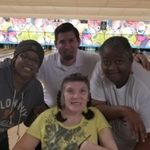 Working for the same employer for ten years is less common today than it once was which is what makes Matt Langley’s dedication to AssistedCare worthy of praise. For ten years, he has been a loyal and valuable membe

r of the team that works with the intellectually and developmentally disabled (IDD) and he is loved by both employees and clients who commend his positive attitude and ability to take care of those in need. Surprisingly, this was not Matt’s first choice of career.

Matt grew up in Wilmington and, because he was always good at math, decided to study Computer Science at Appalachian State University. Not long after starting, he reached a turning point and switched to Philosophy and Religion with a minor in Psychology. He believes his upbringing may have contributed to this change of direction. He has three older brothers, one of whom has cerebral palsy, so caring was an integral part of his family life. While at university, he started thinking about what had influenced him growing up and he realized that taking care of his family was a central part of his core values. He knew then that he wanted to help care for others.

Upon graduating from university, he took jobs working with IDD, behavioral management, and mental health and substance abuse. After three years, he side-stepped into HR management with one of these companies. However, after five years, he was drawn back to hands-on rehabilitation and as luck would have it, he discovered AssistedCare. He wanted to work for a locally owned and operated business and felt that AssistedCare had a presence in the community. He says, “I wanted to be in a place where they know who you are.” He started working for AssistedCare in November 2007 and soon realized it was akin to being part of a family.

Starting as a part-time habilitation tech with IDD, Matt worked his way up through the ranks. Within a year, he had been promoted to professional case manager and development of his management skills led to another promotion to program supervisor by March 2009. The following year, his demonstrated ability to interpret policies and to teach resulted in his appointment as director of quality management and training for behavioral health. Matt continued in this role until 2014 when AssistedCare moved its focus toward long-term IDD. Matt helped build the new program and assisted with human resources. His prior experience enhanced his capacity to switch between roles and confirmed he is also a great team player. Most recently, in February 2016, he became a dedicated CAP/IDD supervisor.

Matt attributes much of his success to his biggest role model — his father. He describes his father as a great mentor who displays leadership and has a strong personality, yet still has a calm and fun outlook on life. Matt says his father inspires him to challenge himself and make an impact every day. This motivates him to do everything he can to help individuals and their families. As a colleague once said to him, “What we do is not a job; it is a way of life.” Matt gains job satisfaction from giving individuals the resources to be independent and successful and says, “I love seeing people integrating and becoming a part of our community.”

We believe our community is lucky to have him. People who reach out to us and interact with Matt experience a level of compassion common to the AssistedCare community. We build relationships and foster growth and development. Congratulations Matt on your 10-year anniversary with AssistedCare!

Back to News Page

Mobile Simulation Lab, A Win For All